ALL THE THEME DECK CARDS

Deep within the sewers and catacombs of New York City, Alligators can never feel more alive. However, invasive species threaten the home of the Sewer Alligators, and the Alpha won’t settle for it. Evolve these dinosaurs with armored scales and primal instincts, and turn the tides with this Water Spellbook.

Like light, time moves mysteriously. It can feel fleeting or everlasting. Only learned Casters can control the sands of time. Turn water into wine, Contract Unicorns and Golden Bears, and ward evil away using this Light Spellbook. Father Time has already taken an interest in you. Don’t disappoint him.

The North is brutal, cold, and unforgiving. Yet among the frozen lands, life thrives, both in blood and in spirit. Channel the energy of the Alaskan Vortex utilizing this Frost Spellbook. Call upon Woolly Mammoths and Friendly Snowmen. But be careful of this magic, or be trapped by the Ijiraq.

Abound abandoned silos and ancient forests, wildfire begs to envelop the land. Blast away the opposition and ignite Beasties with this Flame Spellbook, accompanied with Explosive Rabbits and Springheeled Jacks. Contract Nita, Black Bearer, and ancient spirit who wishes wishes to reclaim the flame. Can you master the fire?

As Paul Bunyan searches for his beloved friend, he stumbles upon a tribe of Sasquatches, hiding in the thickets. Communing in glass-made nests, they have allied with Paul after he heroically saved their community. Lead Paul and the Sasquatches with this Forest Spellbook, using raw strength and potent powers.

WHAT YOU GET IN EVERY Wilderness THEME DECK:

ALL THE RELEASE EVENT DECK CARDS 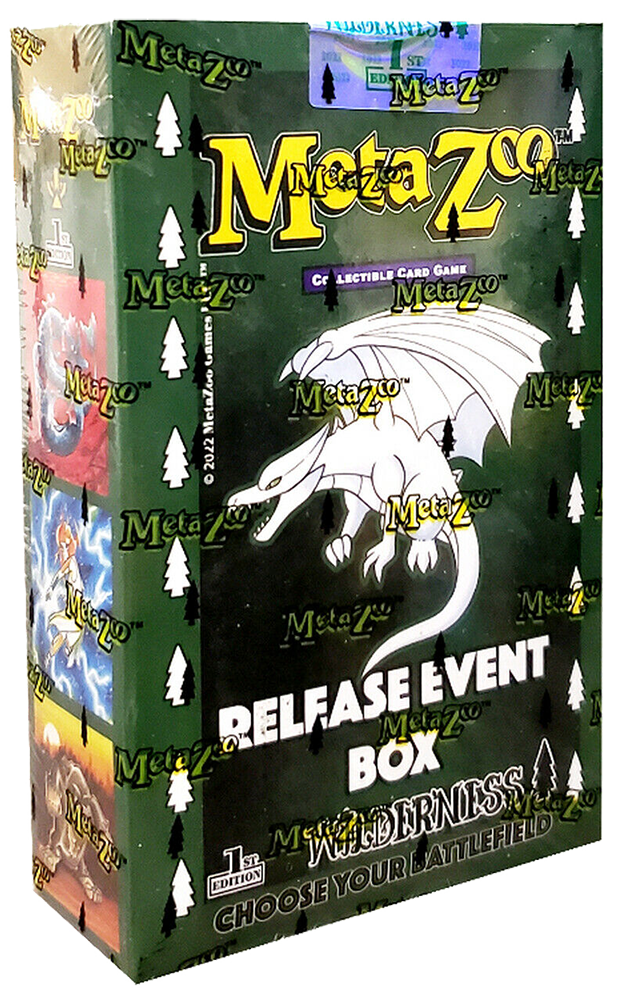 WHAT YOU GET IN EVERY WILDERNESS RELEASE EVENT BOX:

Thanks TO Zord_Cards for the RELEASE Deck info!